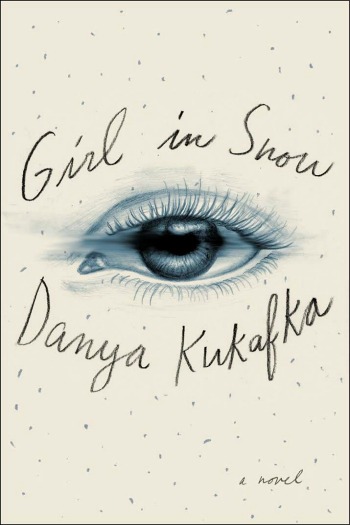 Three unlikely residents of a small Colorado town examine their own hearts as they stumble upon clues in the murder of a popular high school freshman.

” When a beloved high schooler named Lucinda Hayes is found murdered, no one in her sleepy Colorado suburb is untouched—not the boy who loved her too much; not the girl who wanted her perfect life; not the officer assigned to investigate her murder. In the aftermath of the tragedy, these three indelible characters—Cameron, Jade, and Russ—must each confront their darkest secrets in an effort to find solace, the truth, or both.”

Lovely Writing – Danya Kukafka’s writing in her debut proved her to be truly talented. From beginning to end, Kukafka showed a beautiful way of turning a phrase that got to the heart of what her characters were feeling.

“When Mom shifted her weight, the joints in her ankles popped and cracked, a Morse code message he couldn’t understand. Possibly the talus, possibly the subtalar joint. Either way, it was the saddest sound Cameron had ever heard.”

“When I’m finished she’ll press her chest against my back and we will lie there, our separate heartaches shaped different but wearing matching clothes.”

A Tangled Boy – Cameron Whitley was an oddball kid with no real friends. He kept collections: a collection of pens, a collection of bad things, a collection of “Statue Nights.” That last collection was the set of nights he’d spent observing Lucinda. At night Cameron would sneak out of his house, go to hers and stand statue-like for hours just watching. He was a stalker and not all that good at it. People had seen Cameron. The town had reason to believe he could be her killer. Trauma earlier in his life led Cameron to have moments where he felt “Tangled,” sometimes leading to blackouts. When Lucinda’s body is found, Cameron, the boy, mourns what could have been. Cameron, the stalker, becomes a suspect. This fragile boy really spoke to my heart.

Tough Girl with a Heart – When first introduced to Jade Dixon-Burns, the girl who hated Lucinda for stealing her job and her boyfriend, I didn’t like her at all. But, she quickly grew on me. Jade proved to be a keen observer of those around her and a fair judge of character. In general, I liked best the chapters told from Jade’s perspective. In Jade’s chapters, Kukafka often had her writing out a script for a conversation she’d like to have with someone. The title was always the same and put a smile on my face, “WHAT YOU WANT TO SAY BUT CAN’T WITHOUT BEING A DICK.” Jade was a realist who played very well against the perspectives of Cameron and Russ, both more lost and confused.

The Police Officer – The third perspective in Girl in Snow was that of Russ Fletcher, a police officer in their small Colorado town. I had a few issues with Russ. He was not a detective, but always seemed to be around when facts were coming to light. I wondered why Kukafka didn’t just make him a detective. Russ was married to Ines, a Mexican immigrant, and their story felt completely unnecessary to me. It didn’t illuminate anything that had happened to Lucinda. and left me feeling confused and disappointed about the man Russ was.

Witchcraft – Though I liked Jade very much, there was a witchcraft/sign angle in her storyline that I didn’t care for. Every time it came up, I felt impatient to get through it.

The Resolution – While I liked the who dunnit of Lucinda’s murderer, the exact circumstances of how it happened, when it happened, and where it happened seemed highly improbable, and thus disappointing.

Girl in Snow, is a slow burning mystery of a novel, and not a thriller, as some have suggested. Instead, like many mysteries it’s a series of pieces that slowly shift and gain focus until the full picture emerges. Many relationships between characters, often sweet and just as often sad, gave this mystery depth. Unfortunately, others served to bog the story down. In the end, the picture was marred by a few too many pieces to really make it the satisfying change of pace I’d hoped for. Grade: C+