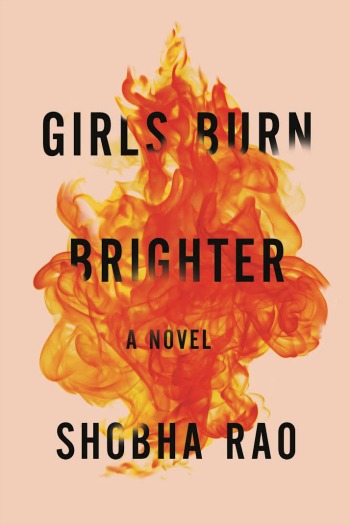 Poornima and Savitha, best of friends from a rural Indian village, separated by evil, spend years trying to find each other while fighting to survive.

“Poornima and Savitha have three strikes against them: they are poor, they are ambitious, and they are girls. After her mother’s death, Poornima has very little kindness in her life. She is left to care for her siblings until her father can find her a suitable match. So when Savitha enters their household, Poornima is intrigued by the joyful, independent-minded girl. Suddenly their Indian village doesn’t feel quite so claustrophobic, and Poornima begins to imagine a life beyond arranged marriage. But when a devastating act of cruelty drives Savitha away, Poornima leaves behind everything she has ever known to find her friend.”

Girls Burn Brighter is a really difficult book for me to review. So difficult that I can’t fit it into my normal what worked and what didn’t format. Why? Part of me wants to say because nothing worked for me, but that’s not true. I was engage throughout the book and wanted to know what would happen next. At the same time, I was horrified and now I’m haunted. It’s a book I wish I hadn’t read, but will also never forget.

This is a story of two girls from the same small Indian village. Poornima, the daughter of a sari maker is poor with few prospects. Savitha, a young trash picker, is even poorer with no prospects. When Savitha is hired to work for Poornima’s father the two find a friendship neither had ever experienced, one that made them stronger, braver, and happier. Life seemed bearable in the glow of their companionship. (Minor spoiler coming!) And then, Savitha was raped….by Poornima’s father and their lives were torn apart. Savitha fled, Poornima was married off and both were miserable.

The rest of the book tells what went on in the lives of both women as Poornima searched to find her friend. It’s a really beautiful premise, but such an ugly journey. Girls Burn Brighter is a story of two remarkalbe, resiliant women who never stopped and rarely felt sorry for themselves, living lives that would absolutely crush most of us. In many books, the abuses that Poornima suffered in her marriage would be the evil in the story, but that was the best of what happened to these girls. Savitha endoured more than any character I’ve ever read including Jude in A Little Life. By the end, I wished I hadn’t read it. I was not left hopeful, but defeated and a little disgusted with myself. It almost felt like I was complicit in Savitha’s abuses just by having read them.

Make no mistake about it, Shobha Rao has written a brave, powerful debut. She imbued her women with their own personalities and strengths, held them to the fire, broke them down, and forced them to adapt. I admire her courage in telling this story, but I can only recommend it with caveats. To read this book you’ll also need to be strong and courageous. You need to know that much of the journey will be appalling. It will grab hold of you in ways you won’t like. It still hasn’t let go of me, and I really wish it would. Maybe that makes it a great book. I’m really not sure. Grade: A?, B? C?, I just don’t know.