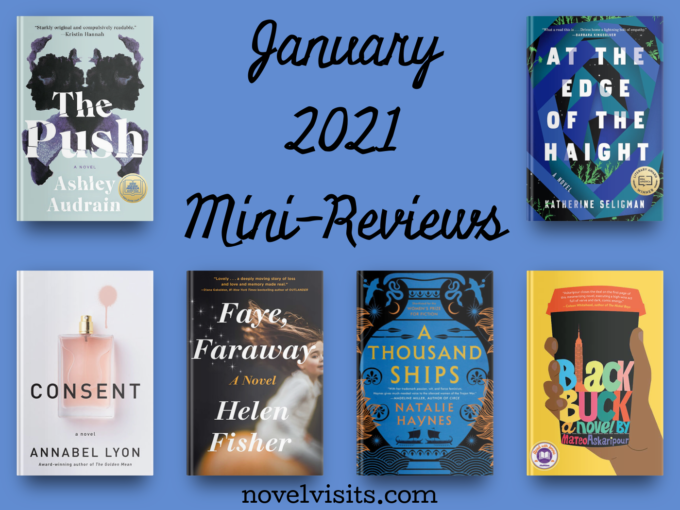 Though I’ve read a lot of books in January 2021, I haven’t posted a lot of reviews here. My life is crazy right now between work, having the entire inside of the house painted, and getting bids/ideas together for a complete kitchen and bathroom remodel. It’s a lot and something has to give. Unfortunately for now, the blog is where it’s going to happen. I’m committed to keeping up the things I love, like the quarterly previews, “best of” posts, and monthly mini-review posts like this one. I’m going to try to do Monday “My Week in Book” posts a couple times a month, but we’ll see on that one. I AM posting regularly on Instagram @novelvisits. In fact, these end of month mini-reviews are pulled from what I wrote for Instagram. So, if you’re not following me there, I’d love it if you would. Right now, I just have to do the best I can to stay sane! So, onto my January 2021 Mini-Reviews which include FOUR debut novels. 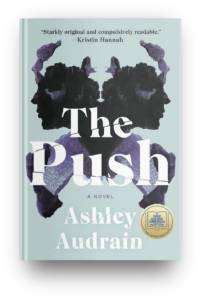 My Thoughts: THE PUSH by Ashley Audrain hadn’t initially been a book that I planned on reading, but I couldn’t ignore its legions of fans. Now, you can count me among that army. In the midst of clearing out rooms, going through files, and picking paint colors, I still managed to fly through this book in only a couple of days. It was a perfect respite from the chaos in my house right now.

You might already know the basics of the story: Blythe has little to no connection with her daughter, Violet, and worse still, has reasons to fear her. I loved the way debut author Ashley Audrain sewed doubt into Blythe through generations of unstable mothers in her family, and her husband’s unquestioning loyalty to Violet. I also loved that I was never quite sure. Was it just Blythe? Or, were her doubts around Violet merited. Until the VERY end, she had me guessing. Now that’s how to keep a reader on the edge of her seat! Grade: A- 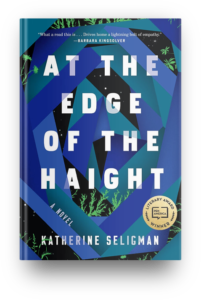 My Thoughts: It’s not often you read a book where the main character is homeless, but in AT THE EDGE OF THE HAIGHT Maddie, 20ish, had made the streets of San Francisco home for a very long time. When she stumbled upon a murder in Golden Gate park, Maddie’s precariously built world, slowly began to crumble. What I appreciated most about Maddie’s story was the homeless perspective. For Maddie, it was normal, even a comfort. Despite the daily struggles, she feared losing herself if she let it go.

At the Edge of the Haight was all Maddie and because of that I think it skewed a little YA. As interesting as her journey was, the story might have been richer with a little more focus on some of the other’s in her world. The parents of the murdered boy played a big role which at times I struggled with, but overall I found this a very solid read. Grade: B-

Note: I received a copy of this book from Algonquin (via Edelweiss) in exchange for my honest thoughts. 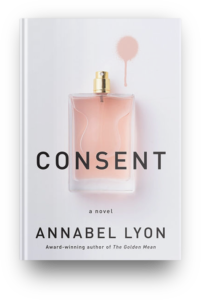 For much of the book, their stories are completely separate, until finally they link. Even though Consent was a very different sort of story, I really enjoyed it, especially as it got closer and closer to the end where Sara’s and Saskia’s worlds began to overlap. It’s dark, and the women’s path toward revenge may not be for everyone, but I loved the exploration into the more shadowy side of the female soul. One last warning: the ending is VERY abrupt. It will leave you stunned! Grade: B 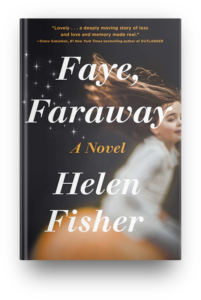 My Thoughts: I’ve recently had a thing for quirky characters and out there premises and FAYE, FARAWAY by Helen Fisher falls squarely in that wheelhouse. Happily married and the mother of two young daughters, Faye stumbles into a box in her attic and travels through time, to 1978, a few years before her mother vanished. Now this is the part you just have to accept. Let the box as a vehicle for time travel go and get on with the story!

Since she was 8-years old Faye has longed to know her mother, to understand what happened. Suddenly, as a woman in her 30’s, she gets that opportunity. Of course she’s going to take it. I think because I lost my father as a young child, the idea of getting to know that missing parent resonated with me. No doubt, there were parts I had to overlook, but in general I found it a fun, nice story. And can’t we all use a little nice these days? Grade: B

Note: I received an ARC of this book from Gallery Books in exchange for my honest thoughts. 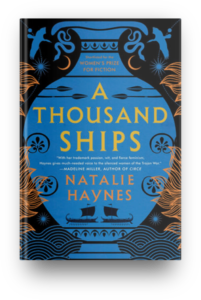 My Thoughts: I can wait no longer. It’s finally time to talk about A THOUSAND SHIPS by Natalie Haynes. I’ve long been a fan of Greek mythology retellings, counting Circe (my review) and The Song of Achilles (my review) by Madeline Miller and The Silence of the Girls (my review) by Pat Barker all among my favorites. A Thousand Ships sets out to do what the other three books did: retell the stories of The Iliad and The Odyssey but exclusively from the point of view of the women affected by this great war of men.

For the most part Haynes devoted each chapter to a different woman whose part took place before, during, or after the Trojan war. As they related the events of The Iliad, I admired how proudly each endured all situations, though never forgetting what had happened to them and who was to blame. The story of The Odyssey was related by Penelope, the long suffering wife of Odysseus. Written as a series of letters to her husband, I loved Penelope’s sarcastic and increasingly caustic delivery. At the same time, her letters were the one weak spot in the book for me. I felt like some were just too long, and the whole story of The Odyssey didn’t need to be covered. Still, I highly recommend A Thousand Ships to all lovers of Greek mythology! Grade: A-

Note: I received an ARC of this book from Harper in exchange for my honest thoughts. 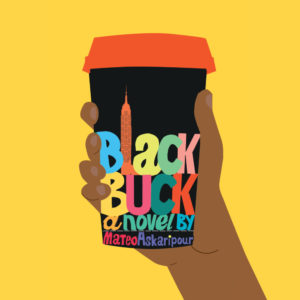 My Thoughts: Listening to BLACK BUCK by Mateo Askaripour was a little bit like being on a roller coaster. The highs were exhilarating and the lows in between, a bit disappointing. I thought Askaripour did so many things right: Black family life, gentrification, the start-up world, and the intensity of sales. Most of the time he made all of it a fun satirical journey, while still delivering a great story. I loved a running bit where the white people Buck worked with were always telling him he looked like different Black actors. Even the sort of initiation into the sales world, started out fun, but then it went on too long and went over the top. That element of going too far happened periodically in Black Buck, to the story’s detriment. The story would have been more real for me had the extremes been reined in. Between Askaripour’s writing and Zeno Robinson’s narration I found Black Buck to be an easy, entertaining listen. Grade: B-

Note: I received a copy of this audiobook from HMH Audio (via Libro.fm) in exchange for my honest thoughts. 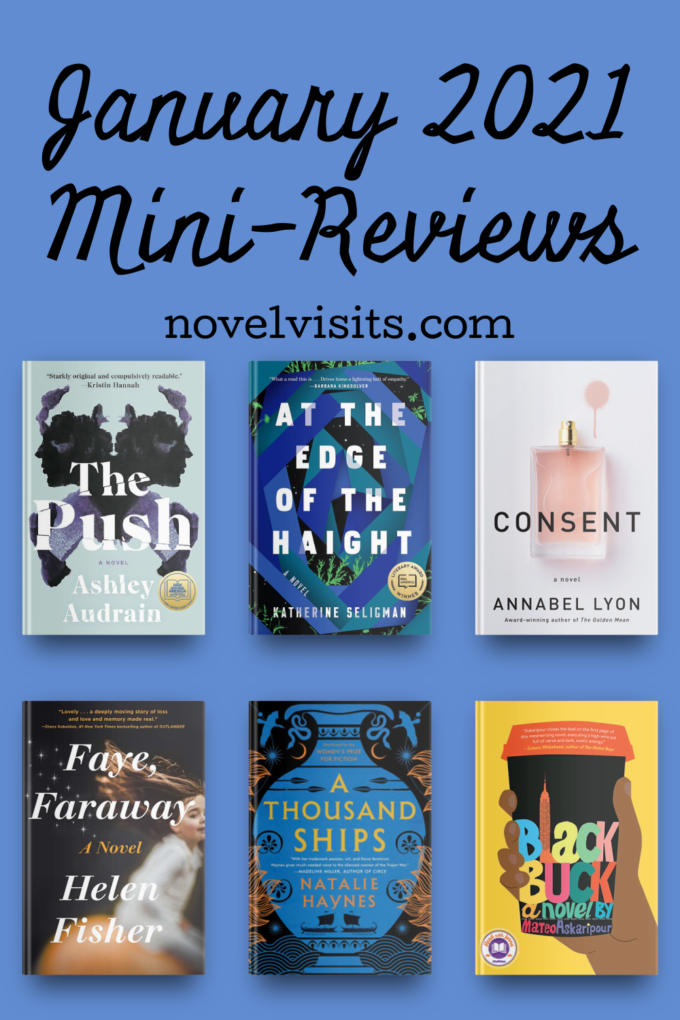