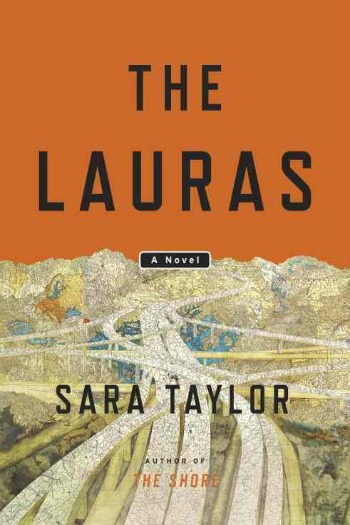 A mother and her child embark on a road trip filled with discovery, about themselves and each other.

”I didn’t realize my mother was a person until I was thirteen years old and she pulled me out of bed, put me in the back of her car, and we left home and my dad with no explanations. I thought that Ma was all that she was and all she had ever wanted to be. I was wrong….Sara Taylor brings the American landscape to vivid life in an unforgettable road novel that strikes at the heart of a mother-child bond.”

Opening Quote – Everyone has to know and love the quote Taylor started The Lauras with. I was laughing out loud.

One Badass Mom – Ma (we never know her name) proved to be one of the most interesting mothers I’ve read in a long time. I liked her very much and disliked her almost as much. Ma had a difficult childhood, living in and out of foster care, and leaving home for good at 17. Her child, Alex, knew virtually nothing about Ma’s past until Ma embarked with Alex on a years long road trip. Along the way Ma shared bits of her past including the five Lauras who helped to shape the woman Ma became. And what sort of woman was that? One both tough and determined. On the quest to tie up loose ends, Ma also burns down a house, punches a man, later holds him at gunpoint, and kidnaps a friend’s child. But, through it all, the one thing that was unwavering for Ma was her love for Alex.

“I fumbled out my latchkey, leaned into the door, and was dragged off my feet and into the room by my mother’s grasping hands. I saw her white, terrified face for a moment before she crushed me to her chest so tightly that I couldn’t breathe.”

An Androgynous Narrator – When I started The Lauras I just assumed Alex was a girl. As I got further into the story, I realized that I assigned the female gender. In reality we don’t know because Alex struggles with gender throughout the story. Strangers around Alex were consumed with assigning a gender, amplifying Alex’s feelings of not belonging and confusion.

“I suppose I was forgettable, came across still as whichever gender a person expected to see, and I was thankful for it even as I worried that this was the last year I’d be able to skate by so easily, that eventually someone would make an issue of my careful androgyny and I’d have to choose my side in the war, make up my mind as to where my allegiance lay, whether I identified more with my mother or my father.”

That pull Alex felt between mother and father extend to far more than gender. Throughout the road trip, Alex longed to see his/her father again.

Beautiful Writing – I found Sara Taylors writing to be beautiful and insightful. Her descriptions were often stunning and always spot on.

“I had to admit, Californians looked…not prettier, really, but healthier, like they’d been fed good food and beat up less by life than the people I’d grown up around, like they exercised on purpose instead of working themselves into the ground.”

One Selfish Mom – Though I liked so much about Ma, she also infuriated me. I struggled with the reality of taking a 13-year old child out of bed in the middle of the night for reasons totally unknown. So often on the journey Alex was in the dark as to what they were doing and was often left to more or less fend for him/herself. Ma had her reasons, but I’m still not convinced that the end justified the means. The journey was for Ma, not Alex.

Tangents – Most of what happened on the trip served to illuminte Ma’s life, but there were a few side stories along the way that just didn’t seem to fit in. They felt a little like filler to me.

In the end, I liked The Lauras very much for what it truly was: a coming-of-age story. Ma’s life drove the road trip, but Alex’s evolution along the way was the more subtle heart of this story, and the reason to read this book. I think Taylor was brave to choose an androgynous teen as her hero(ine), and I’m pleased to say it really worked. Alex is a character that will be difficult for me to forget. Grade: B