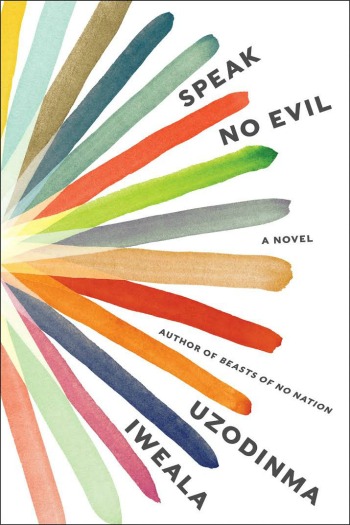 “On the surface, Niru leads a charmed life. Raised by two attentive parents in Washington, D.C., he’s a top student and a track star at his prestigious private high school. Bound for Harvard in the fall, his prospects are bright. But Niru has a painful secret: he is queer—an abominable sin to his conservative Nigerian parents. No one knows except Meredith, his best friend, the daughter of prominent Washington insiders—and the one person who seems not to judge him.”

Coming Out – Speak No Evil is many things, but at its heart is a boy, Niru, coming out to a girl, Meredith. The two had long been friends, had dated here and there, and Meredith very much wanted their relationship to be more than just friendship. Niru, afraid, but no longer able to stomach the pain his rejection caused Meredith, admitted to her that he may be gay. There was much to Niru’s coming out, most of it painfully sad, but I loved the moment these two shared after his secret first emerged.

“She holds me as she murmurs, I’m right here. She says, I’m with you. I start to cry. I’m overwhelmed by the sound of my own pain. She tries to slow things down the way our track coaches slow us down. Count your breaths, Niru, she says. Follow my voice, Niru. And I follow for a moment, but my thoughts are strong and I choke on a mixture of relief, embarrassment, and fear. She pulls me closer and rocks with me. She drapes an arm over me and clasps my hand. She says, I’ll always be here. I say, what do we do now?”

Clash of Cultures – Niru, born in the United States, had for the most part led the life of any other privileged American teen. He went to an elite prep school, had already earned an early acceptance to Harvard, and enjoyed the usual circle of friends. Niru also appreciated many aspects of his Nigerian heritage. Both parents were born in Nigeria, but had immigrated to the U.S. to build very successful careers and give their two sons privileges they hadn’t enjoyed. It seemed he had it all until his father discovered Niru was gay. To his parents being gay was an abomination that had to be exterminated at almost any cost. This clash of growing up in city, in a country where people need no longer be ashamed of homosexuality and a culture where it was completely unacceptable led the reader through a sad and powerful chain of events.

Dual Narrators – Speak No Evil has two narrators, Niru and Meredith, with Niru telling the bulk of the story and Meredith picking up the last third. Much of what happened to Niru in the first half of the story Meredith had little knowledge of and so couldn’t speak to. After coming out to Meredith, Niru lost control in his life and to some extent blamed her. The middle of the book was exclusively Niru’s story, but Meredith emerged again later and picked up Niru’s journey as only she could. Both parts were told in first person which gave the entire story authenticity. From their own vantage points the themes of culture, sexuality, race and ultimately, friendship unfolded.

Formatting – Uzodinma Iweala, like many authors today, chose not to use quotation marks in his book which had quite a lot of dialogue in it. I am used to that now and it doesn’t bother me nearly as much as it once did, but Iweala also didn’t have line breaks in conversations. As an example, I didn’t in any way change the format of the passage quoted above. The lack of line breaks sometimes made for difficult reading and seemed a little lazy.

Coming-of-age stories are one of my favorite genres, so I’ve read many and am always on the lookout for those with a unique twist. A boy coming out in itself doesn’t sound all that different, but Iweala’s story truly was much more than I’d expected. He packed a lot into a slim volume. Both heartbreaking and memorable, Niru’s story is one I highly recommend. Grade: A-