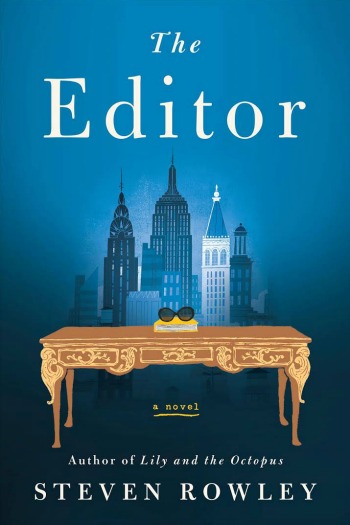 Much to his delight James Smale finds his debut novel being edited by none other than Jaqueline Kennedy Onassis, but her suggestions are much more difficult than he ever imagined.

“After years of trying to make it as a writer in 1990s New York City, James Smale finally sells his novel to an editor at a major publishing house: none other than Jacqueline Kennedy Onassis. Jackie–or Mrs. Onassis, as she’s known in the office–has fallen in love with James’s candidly autobiographical novel, one that exposes his own dysfunctional family. But when the book’s forthcoming publication threatens to unravel already fragile relationships, both within his family and with his partner, James finds that he can’t bring himself to finish the manuscript.”

Dysfunctional Family Relationships – The buzz surrounding The Editor focuses on the fact that author James Smale finds himself in that startling position of having his debut edited Jackie Kennedy Onassis. That’s exactly where the story begins, but it quickly moves into the heart of the autobiographical novel that James has written: a story about the very dysfunctional relationship between a mother and her gay son. Jackie wants more from the relationship in the story. She want’s James to dig deeper. James is terrified. He loves his mother very much, but doesn’t understand her or the choices she’s made. What if by digging deeper, he loses her completely?

A Perfectly Rendered Thanksgiving Weekend – What would a dysfunctional family story be without one of “those” Thanksgivings? From the tensions leading up to the day right through the bombshell dropped at the dinner table, Rowley did it perfectly in The Editor. The dinner scene blew me away and had me giving Rowley a mental high five!

“I can feel a hand reach around my heart and squeeze, and the result is not so much pain as it is fear. Because the next thing that happens is I can’t fill my lungs, I can’t force air into them, I can’t get them to expand. My weight grows in my chair, as if suddenly it were rooted to the floor of a house on another planet with a mass infinitely greater than earth’s a planet where my weight would be double or triple what it is.”

The Ending – I thought the way Rowley resolved this mother-son story was fantastic and I especially loved the very end of their journey together.

The Parts With Mrs. Onassis – For some reason, I found myself not really caring for the parts that involved Jackie. To me they felt a little disingenuous and I had a really difficult time buying into them. They were a little too fangirl, a little too cloying. Each time The Editor came back to Jackie, I grew restless with Rowley’s story.

Dull First Half – For nearly half of the book I really didn’t care much about any of the secondary characters, and the true action was slow to develop. Until the mother-son relationship story took off, I found myself growing weary and as a result did a little skimming.

For me, The Editor was a very up and down story. I liked the mother-son story very, very much, but it was slow to develop, and the parts in between tended to be a little dull. If you read and loved Lily and the Octopus, be aware that this is a much different story, lacking the wit and humor Lily delivered. However, like Lily, The Editor packs a welcome emotional punch in the end. I remain a fan of Rowley and will definitely be in line to read whatever he writes next. Grade: B-

Note: I received a copy of this book from G.P. Putnam’s Sons in exchange for my honest review. Thank You!