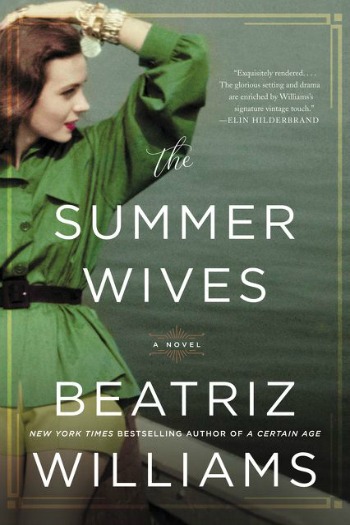 Eighteen years after she fled, Miranda Schuyler returns to Winthrop Island in search of healing, but finds that little has changed except her own family.

In the summer of 1951, Miranda Schuyler arrives on elite, secretive Winthrop Island as a schoolgirl from the margins of high society, still reeling from the loss of her father in the Second World War…..But beneath the island’s patrician surface, there are really two clans: the summer families with their steadfast ways and quiet obsessions, and the working class of Portuguese fishermen and domestic workers who earn their living on the water and in the laundries of the summer houses…..Now, in the landmark summer of 1969, Miranda returns at last, as a renowned Shakespearean actress hiding a terrible heartbreak. On its surface, the Island remains the same—“

Island Life – I very much enjoyed Winthrop Island in the 1930’s, 50’s and 60’s as the setting for The Summer Wives. Williams was able to do so much with this small isolated locale.

“I’d forgotten about the scent of the Sound, which had its own particular tang, different from anywhere else in the world, the English Channel, or the Mediterranean or the South Pacific – or maybe it didn’t, and that was all in my imagination.”

To the locals it was home where they ran the shops, worked as lobstermen, went to church and in the summers served the families that swarmed to the island. Though the locals and the summer inhabitants were outwardly friendly, the class distinctions were dramatic and systemic. Nowhere was that more obvious or more life changing than in the forbidden attractions that ran through this story.

Miranda – Most of The Summer Wives unfolded with first-person narration by Miranda Schuyler. She first arrived on Winthrop Island in 1951, fresh out of high school and there to attend her mother’s wedding to Hugh Fisher, one of the wealthiest of the summer inhabitants. Miranda spends the rest of that summer with her new stepsister, Isobel, learning the ins and outs of island life. Eighteen years later she returns, a famous actress, looking for the island’s solitude to nurse her broken heart. Miranda’s back and forth telling of the island’s history through her limited lens worked very well and kept me wanting more.

Weak Women – As much as I liked Miranda as a storyteller, I found her to be frustrating in that she tended to let others dominate her. As a 17-year old thrust into a level of society she’d never really been a part of this made sense. However, it seemed she should have gathered a little more wisdom as she aged. I don’t want to give away anything in the story, so I’ll just say that I also found both Isobel and Miranda’s mother to be disappointing to me as females. It especially seemed out of character for Isobel, so outgoing and social in the beginning, to lose much of herself over time.

The Mystery to the Story – I found the “unknown” element to the story unsurprising, and just a little hard to believe. It didn’t matter much to me that I was able to predict what had happened because I still enjoyed the journey, but I wish Williams had provided a little more of the backstory to make her twist just a little more real.

This time of year many of us are looking for lighter summer reads and The Summer Wives fits that bill perfectly. Much more than just fluff, Williams’s novel is an old-fashioned sort of story, rich in drama over love and money. It’s most definitely a beach-worthy read. Grade: B

Note: I received a copy of this book from William Morrow (via Edelweiss) in exchange for my honest review.