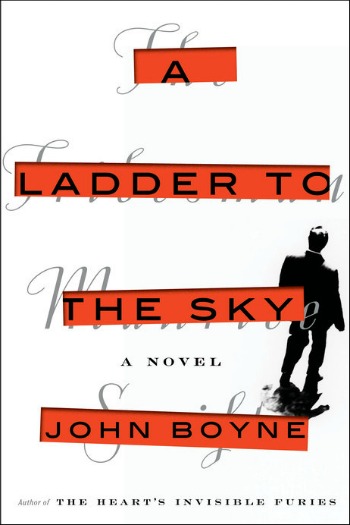 A man with massive writing skills, but no original ideas will stop at nothing to harvest them from others.

“Maurice Swift is handsome, charming, and hungry for fame. The one thing he doesn’t have is talent – but he’s not about to let a detail like that stand in his way. After all, a would-be writer can find stories anywhere. They don’t need to be his own…..Sweeping across the late twentieth century, A Ladder to the Sky is a fascinating portrait of a relentlessly immoral man, a tour de force of storytelling, and the next great novel from an acclaimed literary virtuoso”.

Maurice Swift, A Man You’ll Love to Hate – If you were one of the legions of fans of Cyril Avery, John Boyne’s main character in The Heart’s Invisible Furies, be prepared to have a MUCH different reaction to Maurice Swift! He starts out as a young wannabe writer with absolutely NO original ideas. Maurice soon befriends lonely, aging author Erich Ackermann and manipulates the man into sharing the deepest, darkest secret in his life. In short order the author’s secret becomes Maurice’s first bestseller, destroying Ackermann in the process. And, that is NOT the worst of Maurice’s crimes in his never-ending hunt for good ideas. Throughout A Ladder to the Sky I alternated between shock and awe at this truly evil man.

A Fun Foray Into the Publishing World – As Maurice used his unusual “talents” to enter the publishing world, so too did the reader. I enjoyed learning about writers’ tours, finding and keeping agents and publicists, and the many stressors affecting authors. Maurice went through more than one publisher as his career waxed and waned. The pressure he felt to continue publishing and remain “relevant” felt very real, something I imagine many authors might feel. His large ego led Maurice to always believe he was best and to almost hate anyone who garnered more accolades than he did. I almost felt sorry for him. ALMOST!

Boyne’s Writing – Make no mistake about it, John Boyne’s writing, his storytelling craft is the real star of A Ladder to the Sky. His ability to breathe life into his characters continues to amaze me, and the fact that he does it equally well with heroes and villains has quickly made Boyne one of my favorite authors.

“For a time, I feared that I was finished. The greatest writer of his generation, stalled for lack of an original thought. Really, I should have had more self-belief. If I’d learned nothing else since leaving Yorkshire at the end of the 1980’s, it was that, like the proverbial cat, I had a habit of landing on my feet.”

The End – While I very much liked where Maurice ended up and and even how it happened, I also felt it dragged on and on. Sadly, I grew a little bored in the last quarter of A Ladder to the Sky, anxious to have everything wrap up. This was also the part of the book where Maurice’s actions felt least believable to me.

Overall, A Ladder to the Sky has only made me a bigger fan of John Boyne. A well-written story is always a pleasure and this was no exception. While it’s true that I liked The Heart’s Invisible Furies a bit more, I can highly recommend A Ladder to the Sky. Just be prepared for a VERY different type of story. Grade: B+