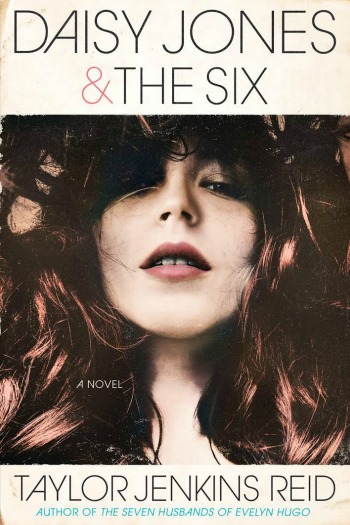 Showcasing the rise and fall of an iconic 1970’s rock band, Daisy Jones & The Six can be described in two words: pure fun.

“Daisy is a girl coming of age in L.A. in the late sixties, sneaking into clubs on the Sunset Strip, sleeping with rock stars, and dreaming of singing at the Whisky a Go Go. The sex and drugs are thrilling, but it’s the rock ’n’ roll she loves most. By the time she’s twenty, her voice is getting noticed, and she has the kind of heedless beauty that makes people do crazy things.

Also getting noticed is The Six, a band led by the brooding Billy Dunne. On the eve of their first tour, his girlfriend Camila finds out she’s pregnant, and with the pressure of impending fatherhood and fame, Billy goes a little wild on the road.

Daisy and Billy cross paths when a producer realizes that the key to supercharged success is to put the two together. What happens next will become the stuff of legend.”

The Format – I think readers are either going to love or hate the method of storytelling in Daisy Jones & The Six. Taylor Jenkins Reid told this in a way you rarely see, a series of interview snippets, a sort of oral history from the people who were involved. I LOVED it! The book itself is broken into chapters having to do with albums, tours, etc., but the story unfolds from the different perspectives of everyone involved with the band: the musicians themselves, their manager, producer, significant others, journalists, and more. Everyone owns a little piece of the band’s history and the pieces often don’t fit together perfectly. As is true with almost any history, people who were there don’t always remember things exactly the same and that is precisely what made Daisy so remarkable. Taylor Jenkins Reid gave a full picture, but sometimes parts were a little blurred. Brilliant!

Rock & Roll in the 70’s – I’m predisposed for having a bias toward a book like Daisy Jones & The Six because it’s from exactly the era when music and musicians really became big for me. I was a teenager in the 70’s, so reading this book I felt like I’d have been one of the legions of fans for this band. I’d have been at their concerts, just like so many other bands I saw in the 70’s. I loved being taken behind the scenes of making an album, performing, behaving badly, and trying to have some sort of a life. Add to that the personal dynamics of the band members and I was in heaven.

“When someone’s presence gives you energy, when it riles up something in you – the way Daisy did for me – you can turn that energy into lust of love or hate.

“I felt most comfortable hating her. It was my only choice.”

The band felt VERY real to me. It seemed like I was finally getting the inside scoop on a band I’d loved as a teen.

The Women – Three very different women beautifully balanced out a book heavy with male characters. Each was powerful and vulnerable in her own way. Daisy, a singer and songwriter, was everything you might expect from such a character and a little bit more. She lived life on the edge, making many, many mistakes, but inside we came to know just how fragile she really was.

“I can’t think of any two things that make you quite as self-absorbed as addiction and heartbreak. I had a selfish heart. I didn’t care about anyone or anything but my own pain. My own need. My own aching. I’d have made anyone hurt if it could have taken some of mine away. It’s just how sick I was.”

Karen, keyboards for The Six, was the only female member of that band and she knew how to play by the boys’ rules, but never lost herself. And the lead singer’s wife, Camila? She was one of the strongest women you’ll ever meet. In her own quiet way she really was THE driving force behind Daisy Jones & The Six. Without her the band might have gone in a totally different direction.

Nothing – I honestly can’t think of anything I didn’t like about this book. The ending was hard, even a little harsh, but I really don’t see how it could have gone any other way.

Daisy Jones & The Six had huge shoes to fill because I liked The Seven Husbands of Evelyn Hugo so very much (my review). I’d seen a couple reviews where people weren’t completely enamored, but from the moment I picked this book up, I could not stop reading. I finished in just over 24 hours and that’s fast for me. I didn’t want to get to the end, but I also could not stop. There’s no higher praise than that. I highly, highly recommend this one! Grade: A

Note: I received a copy of this book from Ballantine Books (via NetGalley) in exchange for my honest review. Thank you to the publisher.