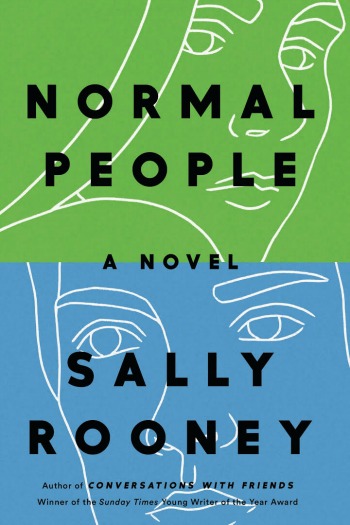 The gorgeous story of Connell and Marianne, a young couple who alternately come together and break apart, comfort and hurt each other, love and let go.

“At school Connell and Marianne pretend not to know each other. He’s popular and well-adjusted, star of the school soccer team while she is lonely, proud, and intensely private. But when Connell comes to pick his mother up from her housekeeping job at Marianne’s house, a strange and indelible connection grows between the two teenagers—one they are determined to conceal…”

An Intense Character Study – Normal People is the story of Connell and Marianne and their ever-changing relationship. It dives deep in to the psyches of each and into the complicated dynamics of their feelings for each other. As the story opens the two seem fairly normal for high school kids. Both are extremely intelligent, going back and forth for the top spots in every class. He’s the popular jock with lots of friends. She’s the nerdy girl no one wants to be friends with. He’s shy. She’s willing to speak her mind whether people like it or not. They both live with single moms. His had him at 18 and works as a maid in Marianne’s home. Hers, a wealthy lawyer, largely ignores Marianne. He never knew who his father was. Marianne feels relief hers died. Near the end of high school a spark grows between the two and slowly an intimate relationship begins, but Connell, fearing what his friends might think, insists they keep it secret. Marianne, happy for any connection, readily agrees.

As the book moves forward, jumping weeks or months between chapters, we learn more and more about these two people as they navigate the complicated world at Trinity College and beyond. There, Marianne is in her element, whereas Connell becomes lost.

Marianne’s many ghosts begin haunting her, and she often turns to self-medication (in many different forms) to keep them at bay. Connell, increasingly confused about his life, feels isolated even when surrounded by people. The older they grow, the more complex, the more heartbreaking their problems become.

Emotionally Charged – I found the emotional side of these two characters to be beautifully written. Sally Rooney presented you with two very flawed, often frustrating characters, but also gave you background to understand them. Connell, on the surface looks to be the more stable of the two, but as we move through the book we see his uncertainties about most everything tear him apart.

“Internally he felt nothing. He was like a freezer item that had thawed too quickly on the outside and was melting everywhere, while the inside was still frozen solid. Somehow he was expressing more emotion than at any time in his life before, while simultaneously feeling less, feeling nothing.”

He strives to be a “good person,” but where Marianne is concerned, is he? Money didn’t prevent Marianne from having a childhood that never stops haunting her life. Men have let her down time and time again, and Connell is part of that group.

“There’s always been something in her that men have wanted to dominate, and their desire for domination can look so much like attraction, even love.”

She loves him, but can she count on him? And, why can’t these two people who love each other so much find clearer paths of communication? These questions are central to the emotional journey that is Normal People. and the ride is a bumpy, even painful one. This book is a gut punch.

Triggers – To be honest, the entire story of Normal People needed to be told exactly the way it was. Personally, I wouldn’t want anything to be different. However, I know some people can be sensitive to scenes of abuse, both with and without sex involved, so be warned.

I just loved Normal People. Rooney delivered a gorgeous story of deep, deep friendship that was also terribly flawed. Each needed much from the other, and yet feared the vulnerability of asking. The push and pull of their relationship broke my heart and kept me turning the pages. Normal People was definitely a love story, but so much more and that’s the only sort of love story for me. Grade: A

Note: I received a copy of this book from Hogarth (via NetGalley) in exchange for my honest review.