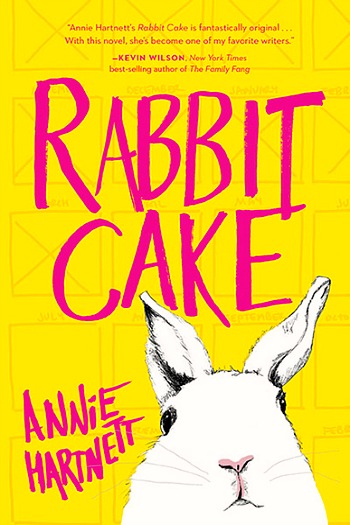 Single Sentence Summary: After a young mother drowns while sleepwalking, her very quirky family is left trying to build a life without the very core of their existence.

Primary Characters: Elvis – Elvis is the 12-year old narrator of Rabbit Cake. She’s looking back on the two years since her mother died and relating all that has happened to her family in that time. Lizzie – Troubled older sister, Lizzie was 15 at the time of her mother’s death, and like her mom, is also a sleepwalker. Dad – Suddenly thrust into the role of single parent, he has a stiff learning curve to overcome. Dad copes with his sadness in unusual ways.

Synopsis: In Rabbit Cake, Elvis, an endearing, intelligent, precocious 12-year, tells the story of her family’s grief with laughter and honesty. She has good material to work with because everyone in her world is a little nuts! Even her mother wasn’t beyond examination. Why had a brilliant scientist been willing to move to Freedom, Alabama? And, just what had she been doing in a shipping crate with the school’s speech therapist? Her father copes with his grief by wearing his late wife’s lipstick and silk bathrobe. Her school counselor kindly maps out Elvis’s mourning on an 18-month time schedule. Most concerning of all is her sister, Lizzie. Lizzie, also a sleepwalker, has had increasingly worse episodes since their mother’s death. The neighbors think a fox is responsible for eating all the eggs in their chicken coop, but no. It’s Lizzie. And then, there are the rabbit cakes. Thousands of rabbit cakes!

Review: I loved Rabbit Cake! Annie Hartnett’s debut is a completely delightful book and I’ll be recommending it highly, but first we need to talk about the elephant in the room, The Sleepwalker by Chris Bohjalian. (My review) These two books, purely by coincidence, have remarkably similar premises. In both, the mother has a long history of sleepwalking, causing concern to her family. She disappears and is assumed to have drown in the nearby river, where her body is later found. Both books have two daughters, one of whom is also a sleepwalker. In each a daughter tries desperately to figure out what “really” happened to her mother. Have no fear if you’ve already read The Sleepwalker because despite all these commonalities, Rabbit Cake is a story like no other. (Honestly, I liked this one a lot more!)

Everything about this story just worked. For a book where a death occurs in the first twenty pages, Rabbit Cake was remarkably fun. The quirks of this grieving family kept a serious story light-hearted, and the telling through the eyes of a wise, but still 12-year old narrator, was a brilliant move by Hartnett. Elvis had been a keen observer of her mother and after losing her, Elvis’s watchfulness shifts to her father and sister. Her dad is wearing make-up and has adopted a talking McCaw that he treats almost like a partner. Her sister Lizzie has been suspended from school and is in danger of being committed to get her sleepwalking under control. Meanwhile, Elvis keeps plugging away trying to hold her family together. Oh yeah, then there are the rabbit cakes. Lots and lots of rabbit cakes!

“I turned eleven, and there was no rabbit cake for the first year ever. I waited for Dad to say something that morning, but he went to work with the parrot dressed in his new tiny sweater, his wings poking out through the sleeves. Dad wiped off his lipstick before he left the house, using some of Mom’s cold cream. I felt sadder and lonelier than I ever had before.”

I don’t know exactly how to classify Rabbit Cake; it’s in part a coming-of-age story, part dark humor, part tragedy, but above it all is a fantastic glimpse into a family’s love. Annie Hartnett has managed to create a truly original story delivered by a narrator with her own unique voice. This is a book that you won’t be able to put down and that you’ll be happy you read. It’s a feel good book! I know that I’ll be eagerly snapping up the next book by Annie. Grade: A-