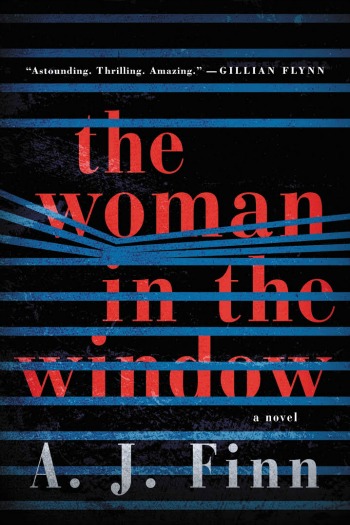 A nosy, merlot-loving, agoraphobic witnesses a stabbing from her window, so why doesn’t anyone seem concerned?

“For readers of Gillian Flynn and Tana French comes one of the decade’s most anticipated debuts, to be published in thirty-six languages around the world and already in development as a major film from Fox: a twisty, powerful Hitchcockian thriller about an agoraphobic woman who believes she witnessed a crime in a neighboring house. It isn’t paranoia if it’s really happening….”

Anna – I loved the voice of the woman in the window, Anna. Professionally, Anna was a psychotherapist, so she knew better than most that she was a hot mess. She was up front about her many flaws: agoraphobia, her family gone missing, a serious merlot addiction, spying on her neighbors, and her popping of pills like they’re a bag of M & M’s. What’s not to love about such a self-aware train wreck?

Mystery – The “whodunit” of the neighbor’s stabbing in The Woman in the Window held up very well. Finn kept changing things up for Anna just enough to have me constantly second guessing my own theories. That aspect worked very well.

Old Movies – A.J. Finn used references to old movies to give The Woman in the Window a sort of noir feeling. Unfortunately, he relied too heavily on this device, making something of a tiresome gimmick. In the last quarter of the book, these references ramped up even more to the point where it became annoying to this reader who is decidedly not an old-movie buff.

“I know what I saw that night. I saw a movie. I saw an old thriller resurected, brought to bloody Technicolor life. I saw Rear Window; I saw Body Double; I saw Blow-Up. I saw a show reel, archive footage from a hundred peeping-Tom thrillers.”

Ending – For me this story had two lethal flaws. First, an action taken by Anna near the end was just too far out there to be in any way realistic. Second, the ending was entirely expected, reminding me what too often leaves me unsatisfied about psychological thrillers.

I enjoyed the opening scenes in The Woman in the Window as debut author Finn introduced Anna and her neighbors and laid the groundwork for his thriller. From there, the story leveled out, keeping me going, but less interested. (A little like that feeling of wanting to nap during a movie.) In the end (much like a B movie), The Woman in the Window just didn’t deliver the thrill I was hoping for. Grade: C+