July has been a big month for many reasons. It’s my first month off school, though technically retirement doesn’t start until September 1, and I really don’t expect to actually “feel” retired for at least another month after that. There’s still a lot going on and maybe that’s the new normal, but I’m hoping not. A week and a half ago, we had buried my mom’s ashes next to her mother’s grave and later that same day had a wonderful party to celebrate her life. It felt good to honor her and to get past that. We still have about 15 tubs of her things to go through, but we’ll save that for a little later. Around all that, I managed to get quite a bit of reading done and am happily sharing six of my favorite books in my July 2021 Book Reviews. 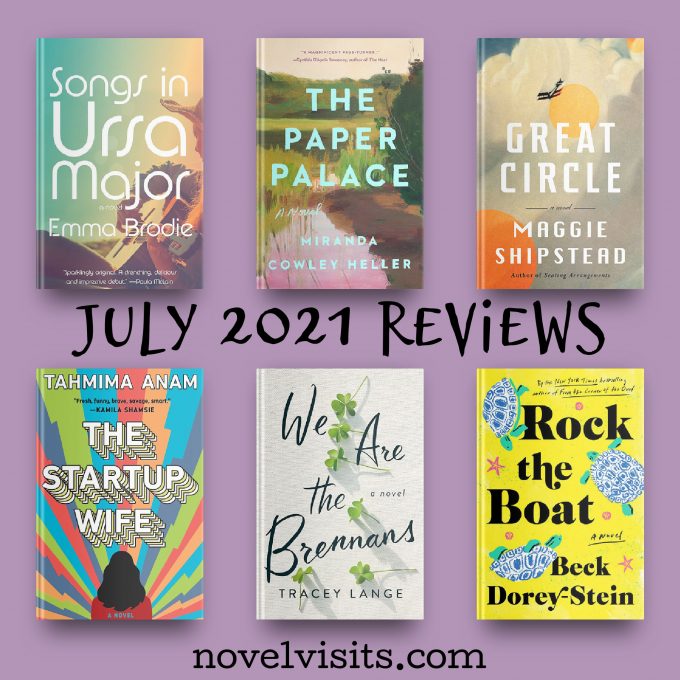 Each of the six books covered in this post I read in print. I’ll share audiobooks in a separate post on Thursday, but for today you’re in for some special books, including one that just might end up being my best of the year! 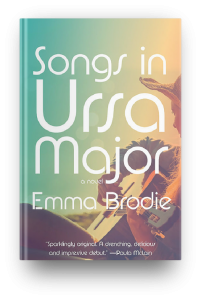 My Thoughts: I’m not a musician by any stretch of the imagination. I’ve never even been hardcore into music, yet in the last few years it’s become clear that I love stories centered around music. 𝐒𝐎𝐍𝐆𝐒 𝐈𝐍 𝐔𝐑𝐒𝐀 𝐌𝐀𝐉𝐎𝐑 by debut author Emma Brodie, my latest love in this little sub-genre that includes 𝘋𝘢𝘪𝘴𝘺 𝘑𝘰𝘯𝘦𝘴 & 𝘛𝘩𝘦 𝘚𝘪𝘹, 𝘛𝘩𝘦 𝘌𝘯𝘴𝘦𝘮𝘣𝘭𝘦, 𝘔𝘢𝘳𝘺 𝘑𝘢𝘯𝘦, and 𝘛𝘩𝘦 𝘍𝘪𝘯𝘢𝘭 𝘙𝘦𝘷𝘪𝘷𝘢𝘭 𝘰𝘧 𝘖𝘱𝘢𝘭 𝘢𝘯𝘥 𝘕𝘦𝘷, to name just a few.⁣
⁣
Inspired by a brief affair between Joni Mitchell and James Taylor, 𝘚𝘰𝘯𝘨𝘴 𝘪𝘯 𝘜𝘳𝘴𝘢 𝘔𝘢𝘫𝘰𝘳 follows a young budding rock singer, Jane Quinn and her band The Breakers. As the summer of 1969 is winding down, a fortunate twist of fate launches them from obscurity on a small Massachusetts island to a record deal, and the opening act for a heartthrob folk singer, Jesse Reid. Along the way there’s a little romance, a little friendship, a bit of mystery, a whole lot of male chauvinism, and even more “hell no” from Janie Quinn who refuses to live life on anything but her own terms.⁣
⁣
From the opening number through the last encore, I was completely engrossed in this book, always rooting for Jane, and the people she loved. If you’re also a fan of books set in the world of music, or are just looking for the perfect beach read for a long holiday weekend, I guarantee you will have found both in 𝘚𝘰𝘯𝘨𝘴 𝘪𝘯 𝘜𝘳𝘴𝘢 𝘔𝘢𝘫𝘰𝘳. Grade: A-

Note: My thanks to Knopf for an ARC of this book in exchange for my honest thoughts. 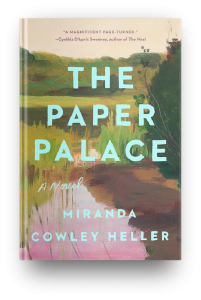 My Thoughts: You know that excited feeling you get after reading only a few pages of a book? That feeling that tells you this one is going to be special? That feeling that you’re reading one of the best books of the year? Well, I got all that last week as I read 𝐓𝐇𝐄 𝐏𝐀𝐏𝐄𝐑 𝐏𝐀𝐋𝐀𝐂𝐄 by debut author Miranda Cowley Heller. Being released today, I’m here to tell you that you’re going to want to read this book!⁣
⁣
𝘛𝘩𝘦 𝘗𝘢𝘱𝘦𝘳 𝘗𝘢𝘭𝘢𝘤𝘦 follows Elle as she struggles with loving two men. She has an incredible partner in her husband, Peter. She loves him dearly. They share three children and a good life together. But then there’s Jonas, her best friend since childhood, her first love. Had life not taken a cruel turn, they’d have long been together. As the story opens, Elle and Jonas have both crept out of a family gathering and had sex while everyone they love chatted inside. From there, Heller beautifully brings together the single, tense day after their union, and all the years leading up to it. Half the story spans those 24 hours and the rest the 50 years of Elle’s life including her mixed up parents, her bond with her sister, her love of the family summer home on Cape Cod, everything that first brought her and Jonas together, and what had forced them apart.⁣
⁣
This book truly had it all: a wonderful sense of place, strong character development, and a plot that propelled me to read “just a little more” over and over again. I guarantee 𝘛𝘩𝘦 𝘗𝘢𝘱𝘦𝘳 𝘗𝘢𝘭𝘢𝘤𝘦 WILL BE on my 𝘉𝘦𝘴𝘵 𝘉𝘰𝘰𝘬𝘴 𝘰𝘧 𝟸𝟶𝟸𝟷 list, maybe even at the top. Grade: A

Note: My thanks to Riverhead Books for an ARC of this book in exchange for my honest thoughts. 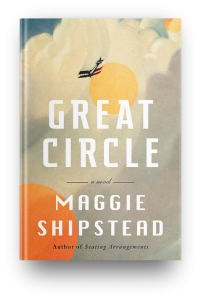 My Thoughts: Growing up, my mom had a real fascination with early female pilots and flying. A little of that rubbed off on me over the years, so I very much looked forward to reading 𝐆𝐑𝐄𝐀𝐓 𝐂𝐈𝐑𝐂𝐋𝐄 by Maggie Shipstead. One half of 𝘎𝘳𝘦𝘢𝘵 𝘊𝘪𝘳𝘤𝘭𝘦 tells the story of Marian Graves and her twin brother Jamie. When tragedy separated the two infants from their parents, they were raised in rural Montana by an uncle who took a bit of a hands-off approach to child-rearing. After barnstormers came through town, igniting Marian’s imagination, her desire to fly could not be deterred. Through some rather unusual means she learned to fly, first working as a pilot running bootleg booze across the Canadian border, and later as a WWII era aviator delivering planes to the male fighter pilots in Europe. Of course, there was far more than just flying to Marian’s story, and her brother’s life offered a great counterpoint to hers, enriching this tale. ⁣
⁣
Had I only read this historical fiction side of 𝘎𝘳𝘦𝘢𝘵 𝘊𝘪𝘳𝘤𝘭𝘦, I’d have given it a solid A-. Unfortunately, there was also a present day timeline that just didn’t do much for me. It told the story of Hadley Baxter, a down on her luck Hollywood actress cast to play Marian in a film adaptation of her life. No matter how far I got, I just never cared about Hadley’s side of the book. So, for her timeline, I’d give it only C-.⁣
⁣
Shipstead worked valiantly to connect the two stories, but those connections often felt forced to me. I’d have enjoyed the book much, much more had she stuck to Marian and Jamie, diving even deeper into both their adult lives. Overall, I guess that lands me somewhere in the middle.  Grade: B-

Note: My thanks to Knopf for a beautiful finished copy of this book in exchange for my honest thoughts. 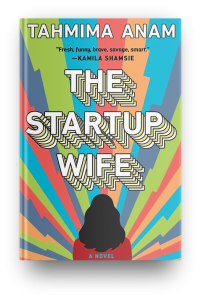 My Thoughts:  𝐓𝐇𝐄 𝐒𝐓𝐀𝐑𝐓𝐔𝐏 𝗪𝐈𝐅𝐄 by Tahmima Anam tells the story of a couple seemingly perfect for each other. They first meet in high school, and when they reconnect 10 years later, they suddenly seem perfect together, and quickly marry. Cyrus is an idea man, already creating personalized, meaningful weddings, funerals and other ceremonies for people he knows and those who’ve heard about his special talent. Asha, is the tech wiz who can write code for anything. She and their best friend, Jules, convince Cyrus to let them create an app to replace traditional religious rituals with things more special and significant for individuals, also creating new communities along the way. Cyrus is reluctant to have his ideas used in such a way, that is, until their app takes off, becoming a worldwide social media sensation.⁣
⁣
I think 𝘛𝘩𝘦 𝘚𝘵𝘢𝘳𝘵𝘶𝘱 𝘞𝘪𝘧𝘦 was a great little story, especially for people interested in or familiar with the tech and startup worlds. I wouldn’t necessarily consider myself one of those people, so those aspects of the story I didn’t enjoy as much as others might. What I did enjoy was the relationships between the three main characters and how those evolved and changed over their time struggling to create something brand new and then even more so when they stumbled into success. The most fully developed character was Asha, who I both loved and was frustrated by. I also appreciated that Anam touched on so many hot-button topics: race, the tech industry and its treatment of women, venture capitalism, artificial  intelligence, ego, and even the global pandemic. I’d love to hear what  those working  in the tech industry think of 𝘛𝘩𝘦 𝘚𝘵𝘢𝘳𝘵𝘶𝘱 𝘞𝘪𝘧𝘦. For me it was a well-written, entertaining book, but probably won’t be one that stays with me for long. Grade: B-

Note: My thanks to Scribner Books for an ARC of this book in exchange for my honest thoughts. 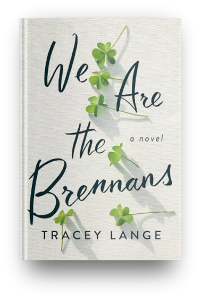 My Thoughts: 𝗪𝐄 𝐀𝐑𝐄 𝐓𝐇𝐄 𝐁𝐑𝐄𝐍𝐍𝐀𝐍𝐒 by Tracey Lange features the type of close, loving, large family that we’d all like to be a part of. That family also happens to have some dark hidden secrets that tip them over to the dysfunctional side, just like many of our own families. Sunday Brennan, the only sister in the mix, had left their small New York neighborhood five years earlier for reasons no one seemed to understand. After her life in California crumbles, big brother Denny brings her home, and the many secrets held by this Irish Catholic family slowly come to light.⁣
⁣
Even though they argued and disagreed on many things, what made the Brennans so special was that in the end, the four siblings, plus a fifth friend that was like a brother, ALWAYS had each others’ backs. Wouldn’t we all like to be part of a family like that? ⁣
⁣
𝘞𝘦 𝘈𝘳𝘦 𝘵𝘩𝘦 𝘉𝘳𝘦𝘯𝘯𝘢𝘯𝘴 was a very well-written family story, but not one that struck me as particularly new or different. I also thought the ending was just a little neat and tidy. Despite those minor flaws, I thoroughly enjoyed my time with the Brennans, flying quickly through their story. It truly would be a wonderful book to pack in your beach bag or read on vacation this summer. Grade: B

Note: My thanks to Celadon Books for a beautiful finished copy of this book in exchange for my honest thoughts. 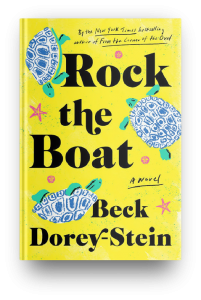 My Thoughts: ROCK THE BOAT by Beck Dorey-Stein was a book I’d long looked forward to because I so loved her 2018 memoir, From the Corner of the Oval. I was excited to see what she’d do with fiction. The story revolves around Kate, dumped by her fiance as the book begins. She returns home to the small town of Sea Point, NJ where she grew up. There she reconnects with Ziggy, her neighbor and childhood friend. Ziggy is reeling from the recent death of his father, a man everyone adored. Into this mix is Miles, longtime friend to Ziggy and nemesis to Kate. He’s come back to town to prove to his mom that he’s capable of taking over the beach resort she owns.

Now this sort of combination is not really unusual and not many of the events in it were particularly surprising, but I still liked it! The beginning was a little slow and for a short time I even considered DNFing it, but am so glad I didn’t Rock the Boat is a perfect example of a book that gets better and better and pays off in the end. The more I read, the more attached I became to the characters, to the point where I even shed a couple of tears at the end. My advice? Give it about 100 pages and then, if you’re like me, you’ll be all in! Grade: B

Note: My thanks to The Dial Press for an ARC of this book in exchange for my honest thoughts.

That’s it for my July 2021 book reviews. What books have you loved recently? 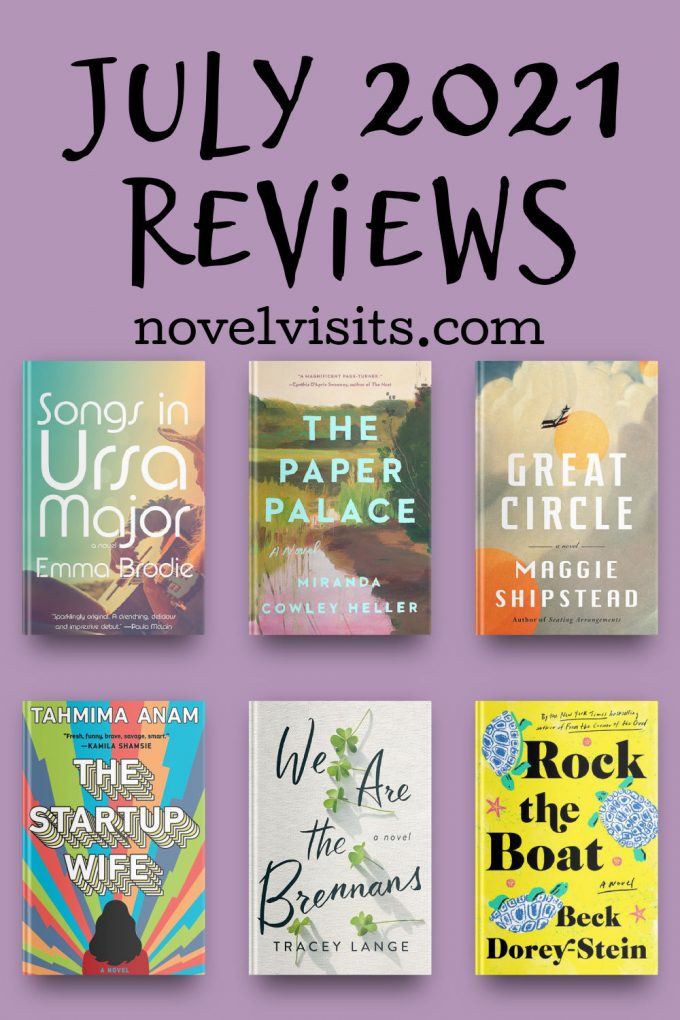